Now that you know there's an LED matrix on the panel, you can use it to make a big story, because Python already gives you a lot of control over the display, so you can use it to create all sorts of interesting effects, and I'm sure this will be a good vehicle for artistic development.

Through the previous chapter, I think you should know the purpose of the first line, then the second line is refers to by the display module to display the built-in Image picture, we show the pattern of the smiling face is just part of the Image, and its name is Happy, and we will show through and placed it on the brackets, to make it, so as the display. just use display.show(Image.HAPPY), began to give it a try. 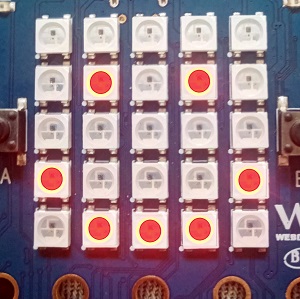 You can see that the number is very large. When you see this, I think you can also try some other pictures. Have a good time, XD

Of course, you don't stop there, so how do you go further? Like creating your own pictures.

Run, you should be able to see a picture like this!! 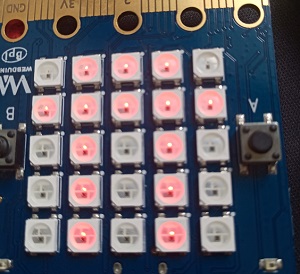 So now that you know how to draw a graph, you should notice that each line ends with one: and at the same time the two sides are enclosed in double quotation marks, which are just numerical brightness, so creating an image is as simple as that.

But actually, you don't have to write multiple lines, if you can make sure that every single line is correct, you can write it like this

How to make a simple animation

Still images are fun, but more fun is getting them moving, which is exciting but easy to do in Python, just using a list of images ~!

Notice that the last element isn't there, it's an Image object, so we can tell Python to store a list of images, but in the built-in method, there are two objects that have already been made. They are image.ALL_CLOCKS and image.ALL_ARROWS.

Like the single image, we use display.show to show on the device, however, we tell Python to use the image.all_clocks list, and then it will understand and show us all the elements of the list in order.Pass the following

Change the color of the image

We will use the above example to change its color with simple modifications. We can see that the biggest difference from the previous code example is the addition of color=Blue to the show() function. This code is added after the Image, where the second argument to show() is. At this time, the color displayed has been modified by us.

Of course, what if the built-in colors don't work? Also in reference to our previous chapter, we can customize a color.

So, let me explain why the code works.

Well, that's all for this chapter, so you can take the time to digest it and make your own fantastic animations!